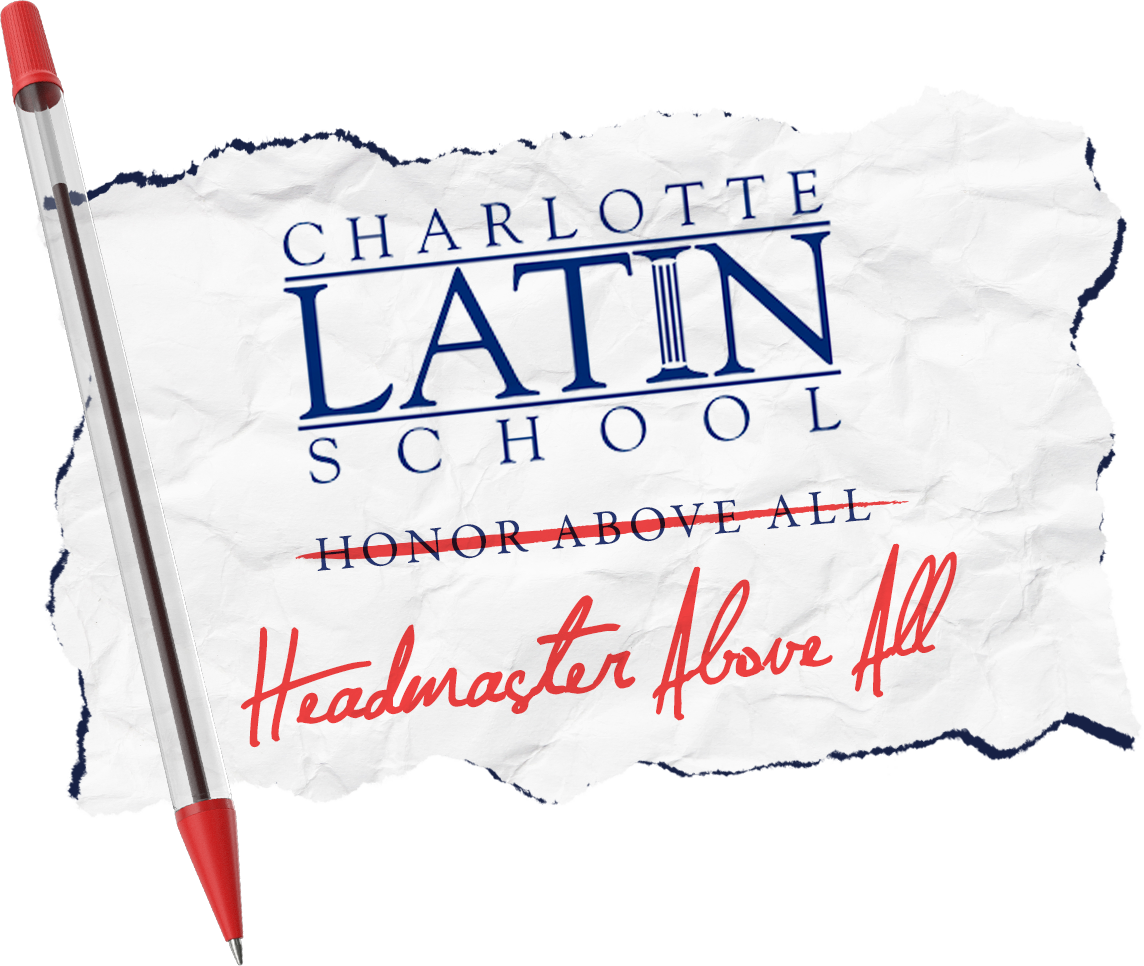 Charlotte Latin leadership under Chuck Baldecchi and Todd Ballaban, has discouraged open dialogue, abandoned the parent school partnership, and created a culture of fear. This is best displayed by the expulsion of Logan and Olivia Turpin, in retaliation for civil and respectful feedback to the Board and the Administration, that Mr. Baldecchi did not like. He states he can instantly expel any students if he deems their parents do not have a “positive working relationship” with him. If he can do this to our children, he can do it to yours. We intend to fight for reforms at Latin, to protect all students and parents from this type of abusive tactics intended to silence parents, students, and faculty, so this can never happen again.

“You need to leave Charlotte Latin. OK, I’m just gonna tell you it is not a good relationship, you clearly are in violation of this. I don’t like the way you communicate.”
- Mr. Baldecchi 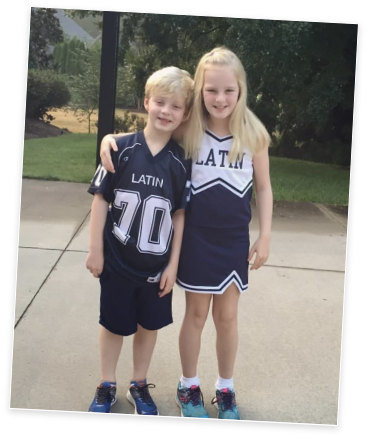 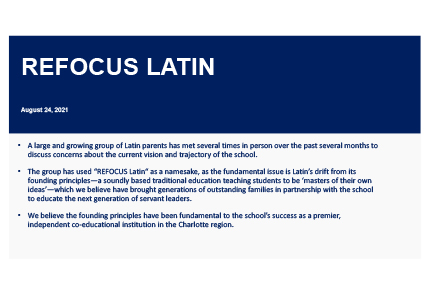 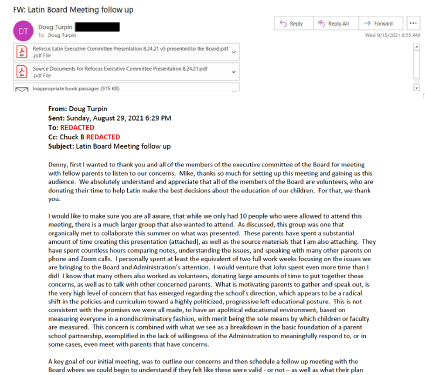 On Friday September 10th, our 11-year-old son, Logan, and our 13-year-old daughter, Olivia, were expelled by Chuck Baldecchi, with just hours’ notice. Our children were ordered, without even knowing why, to clean out their lockers and were permanently removed from the school.

Why did Mr. Baldecchi retaliate against our family? Our family joined with 60 other parents to outline concerns we had with a lack of transparency, a breakdown in the parent school partnership, age inappropriate and pornographic material at Latin, and the rapid changes to the culture and curriculum that were being implemented, hidden from parent’s view. This parents group, outlined their concerns at the request of the Board in a meeting on August 24th. The Board explicitly promised us that there would be no retaliation allowed for this feedback. However, Mr. Baldecchi immediately did that, by attacking this group in a video he released to the faculty and parents. In this video he knowingly made false statements in an attempt to turn the Latin community against the feedback presented to the Board. See the transcript and analysis of that video here. He then followed this up by expelling our two children. This was done to send the message to any parents, students and faculty with concerns, that if you were to say anything he did not like, you would be next.

Regardless of whether you agree or disagree with any of the points that this group of parents made, we believe you should be alarmed that a Headmaster would expel two innocent children during a school year, without notice or any sense of a fair process, simply because he did not like our civil and respectfully provided feedback. Under this policy, at any point if you have a disagreement with what a teacher or administrator says or does, your children may be immediately expelled that day, if Mr. Baldecchi does not like what you said. Parents do in fact have the right to provide feedback to the school. They do not have to blindly trust the school Headmaster, as Mr. Baldecchi told me I must do, in the very brief meeting where he expelled my children.

We can easily demonstrate that our communication to the school was civil, respectful, and not inappropriate. We followed the instructions in the school policies for how to provide concerns. We will provide any information that anyone wants to see. We know that it will exonerate us of wrongdoing, while making it easy to see that expelling our children was a personal retaliation, carried out to silence parents’ voices - by making an example of our family, as to what happens to you if you say something Mr. Baldecchi dislikes. If you wish to see this, click on ACCUSATIONS DEBUNKED

Here are examples of the “inappropriate” communications Mr. Baldecchi cited, as the reasons for why he was expelling our children. These were taken from a recording we made of that meeting. We can provide a transcript of this event, which I made to protect my family from false claims about what was said. See instructions below for how to obtain information.

Mr. Baldecchi asserted that my invitation to other parents to come to a meeting to discuss concerns about events at the school, were not only inappropriate, but grounds for expulsion. He called this a “secret meeting”. If you meet with any other parents to discuss concerns you have with anything going on at the school and it comes to his attention, your children may be expelled. Our meeting was being held with the intention of respectfully approaching the Administration and the Board.

Mr. Baldecchi claims our mere participation in the REFOCUS Latin group and the communication that helped create the group’s presentation, justified the expulsion of our children. But we were invited to create this presentation by Mike Freno, who is the Vice Chair of the Board. Mr. Baldecchi also claimed we posted the presentation on the internet, knowing this was not true.

Mr. Baldecchi falsely and slanderously claimed that I personally stated, “the school was hiring unqualified minority teachers.” He knew there was no evidence of this when he said it. He claimed it was in the presentation made to the Board. You can see this presentation for yourself. This was an intentionally false accusation, meant to turn people against us, with a despicable lie.

Mr. Baldecchi cited that my emails with Board member John Comly, were additional examples of inappropriate communications, that led to the expulsion of my children. But I was simply following up on issues John Comly raised with me himself and asked me to respond to him on.

Mr. Baldecchi stated our requests for my wife, a doctor, to be afforded a meeting with the school to discuss Covid safety policies, was a justifiable reason for our children’s expulsion. We had a group of doctors, with different specialties, including a pediatrician, that wanted a meeting to provide our thoughts and feedback. But that reasonable request for open dialog with school leaders was denied, showcasing the breakdown in the parent school partnership.

Our children were not expelled for their actions. They were expelled because Mr. Baldecchi did not like what their parents had to say.

To see the transcripts of the retaliation video, expulsion recording, or any of the alleged inappropriate communications click here.

A Failure of Leadership 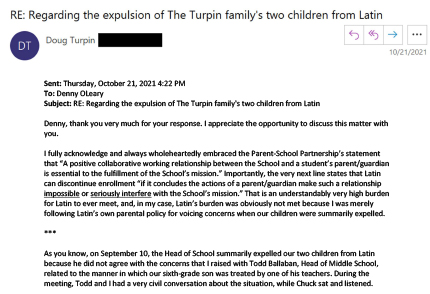 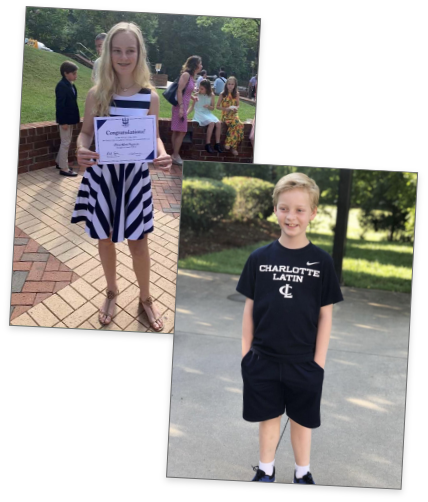 Mr. Baldecchi’s actions are damaging the culture, reputation, and learning environment of a great institution. It is exposing the school to liability and negative publicity. In an effort to keep this in the Latin family and avoid getting to the place we are today, we tried to contact every member of the Board. However, Denny O’Leary is the Board Chair and is a close friend, college classmate and next-door neighbor of Mr. Baldecchi. She has told the rest of the Board that expulsion is the purview of the Headmaster, that he may do as he wishes, without Board oversight or review. She said to me in writing that any parent may have their children expelled if they do not have a “positive working relationship” with Mr. Baldecchi and his administration. Refer to her email back to me and my response email, which outlines why this is a completely illegitimate action. While her opinion was not the opinion of every Board member, it seems as though it was enough to sway a sufficient number of them not to look at the evidence we provided.

On September 14th, the Board stated in its communication to all Latin Parents and Faculty: ”We believe in the equity of opportunity for all and are steadfast in our belief that Latin will be a community where all people and all voices are heard, valued, and respected. We stand firmly behind and reiterate our commitment to increasing the diversity of our community; and, in doing so, foster a vibrant environment strengthened by all voices and perspectives. We welcome thoughtful and constructive feedback from all members of our community as an indispensable element to the continued progress of our school. Differing perspectives and points of view are what challenge us and make us stronger. At times and where appropriate, we expect feedback may be critical and, in such instances, the Board and Administration are committed to honoring such feedback by objectively listening and, when necessary, working in partnership to address.”

If this is true, the Board must see what Mr. Baldecchi has done is directly at odds with this statement. The Turpin family should be offered a written apology, with an offer of reinstatement, as well as an acknowledgement that Mr. Baldecchi slandered us, by knowingly making the false claim that we stated the school was hiring unqualified minority faculty.

Latin was once a school that truly did focus on teaching children what to think, not how to think. That is obviously no longer the case, as it activity focuses on indoctrination of children with left wing ideology, instead of what should be its core mission - focusing on an apolitical education of children. To see examples of just how far Latin has gone off course, click here.

We are also seeking to:

Can you imagine if this had happened to your children? Our kids have been at Charlotte Latin since TK. Latin continuously tells parents how special children are and yet Mr. Baldecchi expelled them at the worst possible time of the year with no notice. Their lives were turned upside down, without cause. We obviously have to fight this expulsion, which leaves a black mark on our children’s record, for a situation where neither they, nor we, did anything wrong. We will do whatever we must, in order to accomplish this. We want our children to see that injustices can be remedied in this world.

Therefore, we have filed a lawsuit to protect our children and our family and hold those that have perpetrated this injustice to account. We have filed this lawsuit against Mr. Baldecchi and Mr. Ballaban personally, as well as against Latin and the Board.

Below is a summary of the items contained in our lawsuit these claims state:

You can read the full complaint here: link

We are asking you to contact the Board if you are concerned with the damage Mr. Baldecchi is causing Latin through his reckless and unjustified actions. His leadership represents a threat to the success of Latin. By contacting the Board, you can help us avoid this matter escalating unnecessarily and going beyond the Latin community, while helping us to advance reforms to once again make Latin a safe place for parents, faculty and students to express their concerns.

Donations will be used to help with the costs of pursuing justice for our children. Any amounts beyond this we receive will go towards helping families that are in similar situations to ours or fighting for the rights of parents to provide feedback to their schools without fear of retaliation.